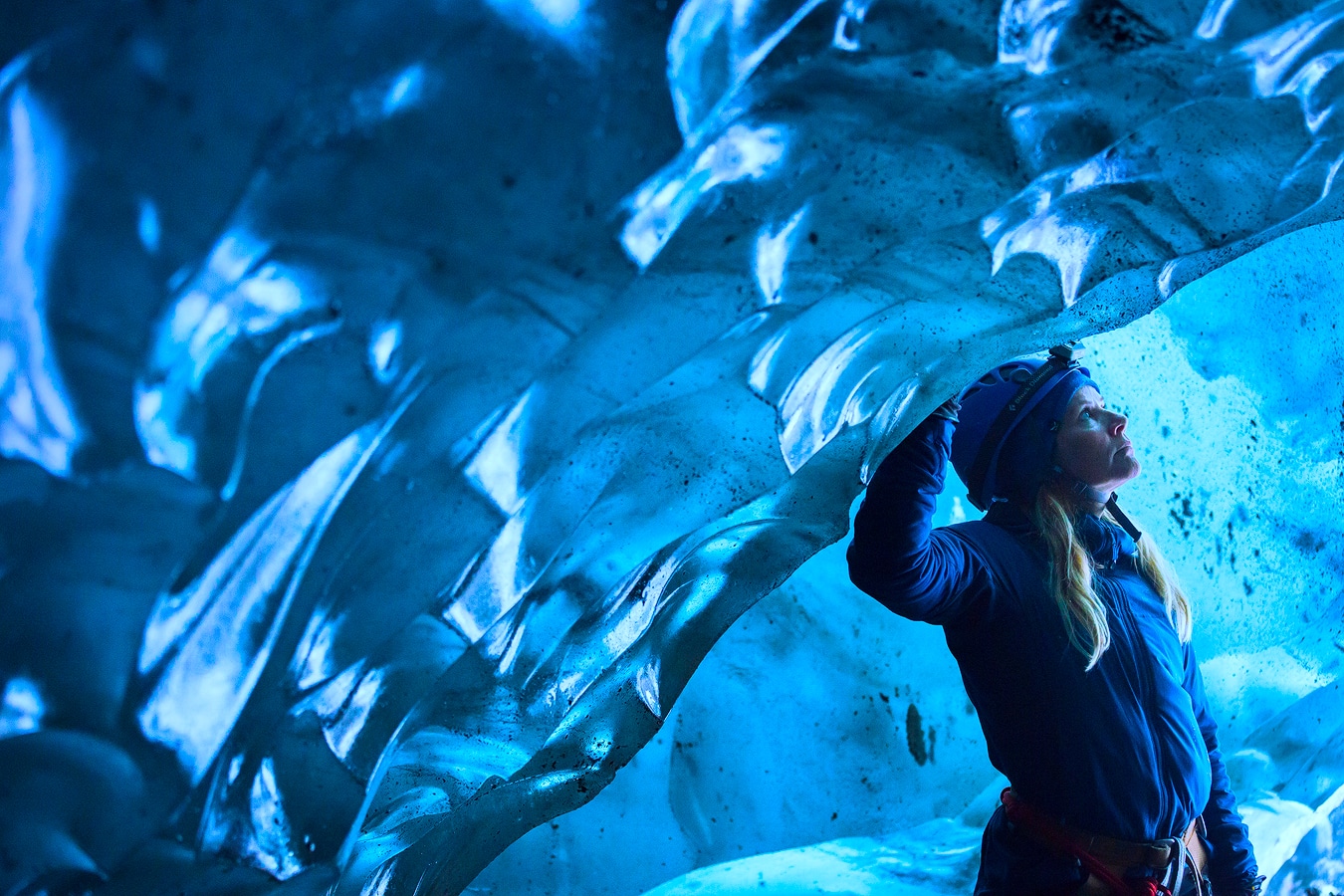 The Ice Caves of Vatnajökull Glacier 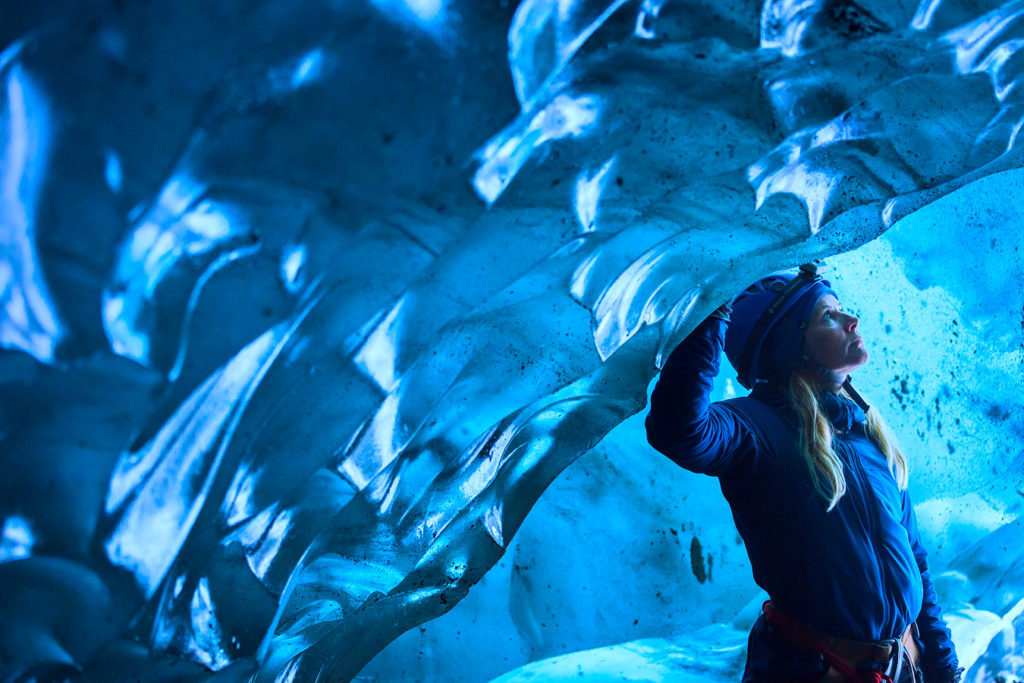 Exploring natural blue ice caves within the enormous glaciers of Iceland is on the bucket list of many people. And if that sounds like something you’d like to do, then Vatnajökull glacier is the best place for it!

The terminology of a glacier cave and an ice cave is quite different. A lava cave that contains ice all year round is called an ice cave, but when the entire cave is made up of thick walls and roof of ice that is called a glacier cave. The terminology has become muddled recently, so if you want to see a blue ice cave, read the description of your tour thoroughly and be sure to book a glacier ice cave tour. 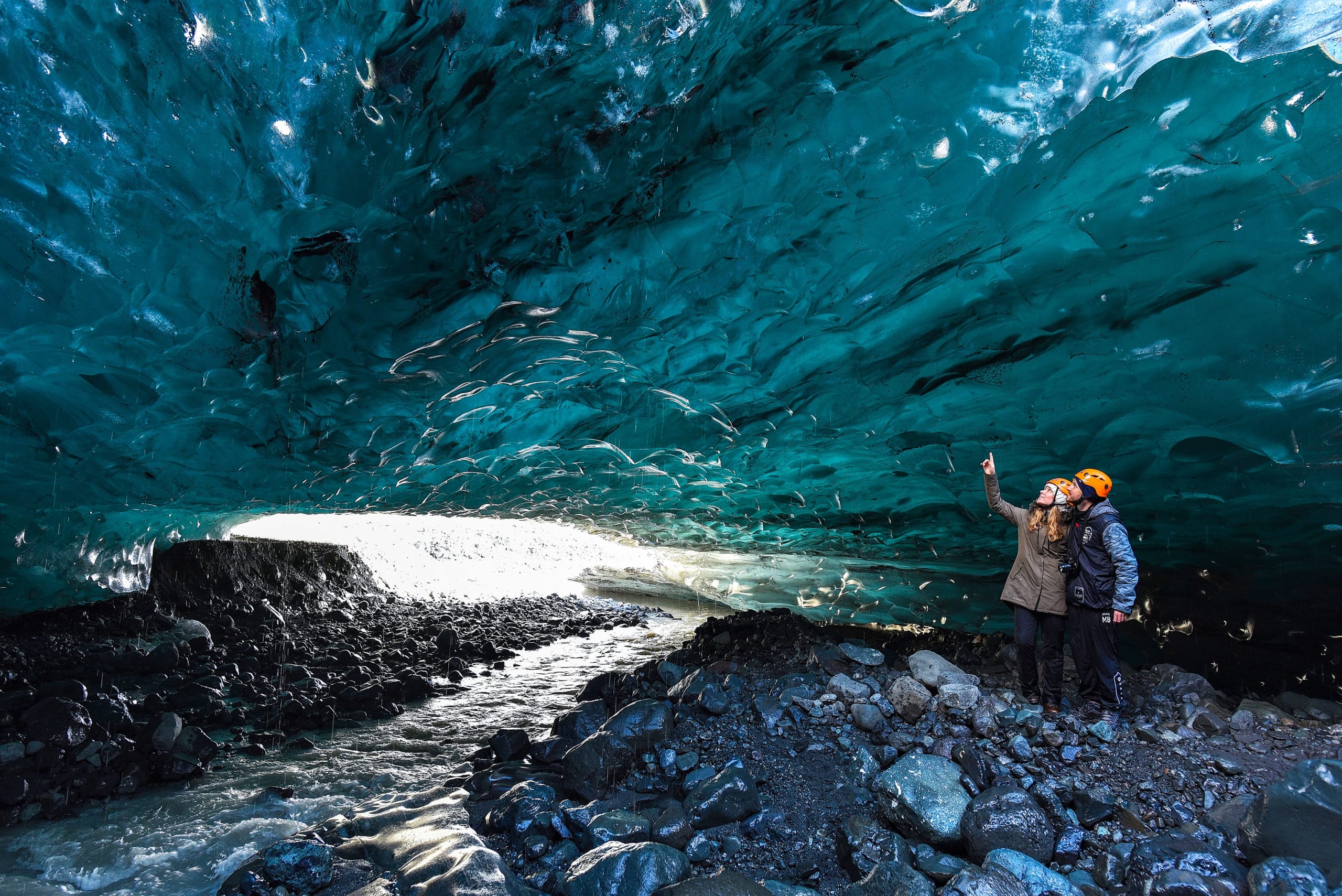 The glacier ice caves are formed during the summertime, when the weather is milder and the glacier is melting more than in wintertime. Melted glacier water trickles down the glacier, carving its way through the ice. Sometimes the water finds a crack and carves a vertical circular hole in the ice that is called a moulin. Moulins are generally unsafe to enter, as they are a vertical drop. However the water needs to exit the glacier as well, and often does so at the edge of the glacier, sometimes forming a wide cave entry. Glacier caves are almost always formed by flowing water, either in conjunction with a moulin, or simply when the water enters a crack or a crevasse and enlarges it through time through melting and erosion.

They can however also be formed due to geothermal heat, seeing as volcanoes are often situated right underneath the glacier ice cap, as is the case with Vatnajökull. From time to time there are volcanic eruptions and an enormous amount of ice melts suddenly, making the glacier retreat a lot. In the aftermath however, the glacier has changed a lot and many glacier ice caves might be found. Vatnajökull hides 5 or 6 volcanoes (depending on how you count them), and the last volcanic eruptions in Vatnajökull took place in 1996 (Grímsvötn volcano) and 2014 (Bárðarbunga volcano).

Glacier ice caves can form anywhere on the 30 or so outlet glaciers that exist on Vatnajökull, but will most of the time form on the edges of the glacier. Some glacier outlets are more accessible than others, and the glacier cave tours mostly take place on the southern side of Vatnajökull glacier, departing either from Skaftafell Nature Reserve or from Jökulsárlón Glacier Lagoon. 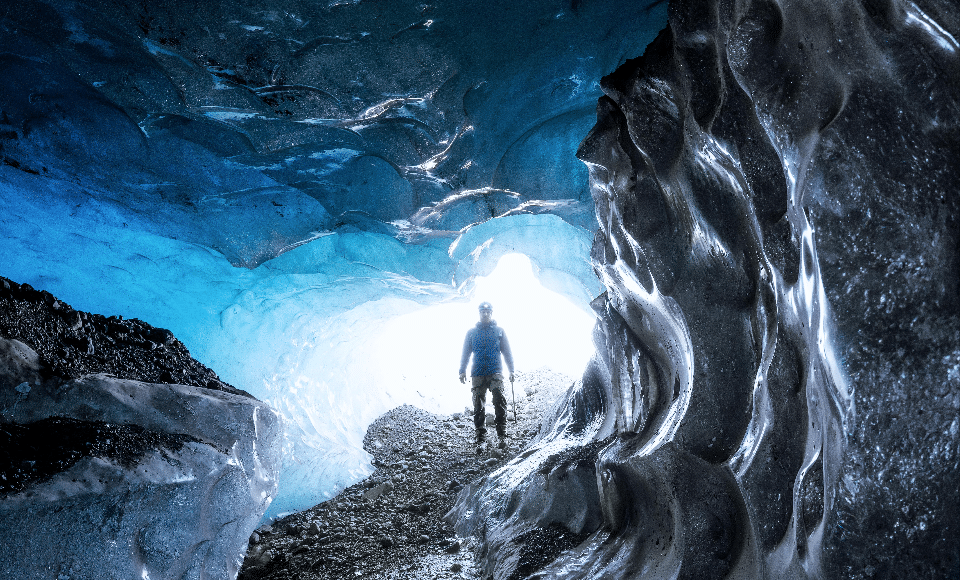 Although the glacier caves are formed in summertime, they can most of the time only be entered in the wintertime. When they are forming then they are filled with water, and can be very unstable and dangerous to enter. In the wintertime the water has frozen again, leaving visitors with tunnels of ice to explore. The ice itself is spectacular, but no glacier ice cave looks the same every year. Sometimes the caves are tall, sometimes they are wide, they can also be narrow or with a low ceiling, with many chambers or just one large arch. They also change daily, depending on what the weather is doing. The caves never get smaller, either the sun or rain carves out a larger area within the cave, or the walls become so thin that the cave collapses on itself and disappears. Each winter guides will go and explore the glacier, in search of a new cave. It is therefore always a unique experience to explore the inside of a glacier ice cave.

The ice within the cave comes in shades of white, blue and black. Perhaps you’ve seen photos of pure blue colour in the caves, as those ones are the most spectacular ones, and therefore the most photographed.

The ice appears blue to our eyes as it is the only colour the ice reflects to our eyes, and the ice absorbs all the other colours. Same reason that the ocean and the sky appear blue. The thicker the ice is, and the more dense it is, the bluer it appears. Because of the weight and pressure of the ice in the glacier, the ice can become extremely dense and push out all the air bubbles. The thickest part of Vatnajökull glacier is around 900 metres of ice, so you can imagine how much weight that is for the ice at the bottom to carry!

It’s also beautiful and interesting to look at the ice that contains an endless amount of tiny air bubbles, making the ice appear more white. Sometimes it seems as if you are looking at an ocean wave that is frozen in time. The black volcanic sand gives the ice a dramatic look, and the caves often have stripes of black contrasting with the white and blue. Notice that you can also sometimes see black ice, or transparent ice that has a lot of black ash surrounding it, and some glacier ice caves are much darker than others.

Glacier ice caves have been found yearly in the past few years, varying in size and splendour, but even if you visit Iceland at a time when no glacier ice cave has been found, the glacier offers dramatic scenery of fields of ice, cracks and crevasses that can still be explored on a glacier hike. 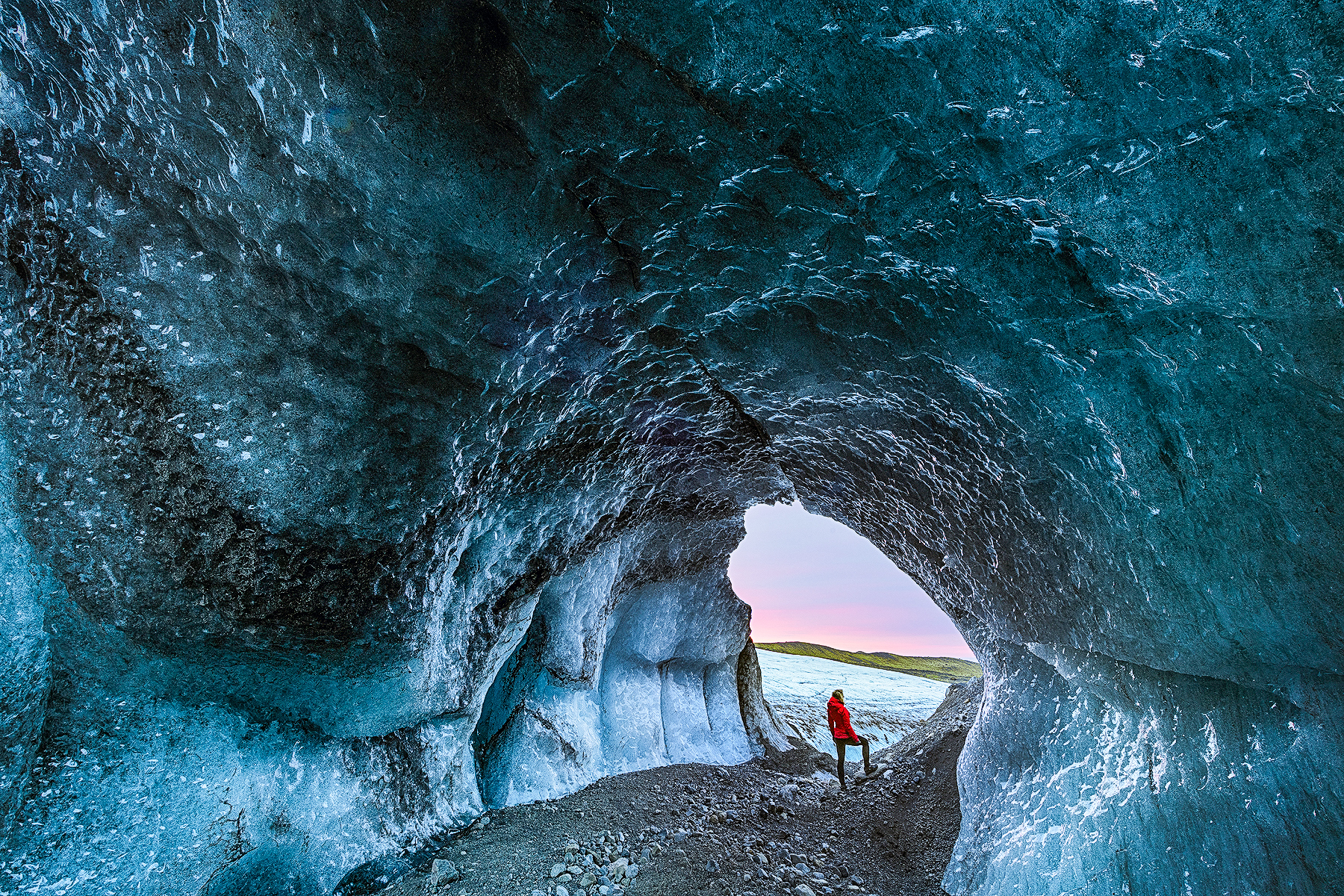 The scenery is so impressive that it often stands in for otherworldly landscapes in big blockbuster Hollywood films or TV shows, including Game of Thrones, Batman Begins and Interstellar. So you can walk in the footsteps of famous actors, or if you decide to go for an ice climbing tour you can even feel like James Bond as you scale up a wall of ice, using special crampons and ice axes.

No matter which tour you choose, Vatnajökull glacier never disappoints.

Tours mentioned in this article are: